Wilhelm Schmidt SVD, priest, linguist, ethnologist, historian of religions, born on February 16, 1868, in Dortmund-Hörde, died on February 10, 1954 in Fribourg, Switzerland. His grave is at St. Gabriel in Mödling near Vienna.

Schmidt entered the mission seminary at Steyl in the Netherlands in 1883, where Arnold Janssen had founded what became the Mother House of the Society of the Divine Word (Societas Verbi Divini, SVD) in 1875. Here he also studied his Philosophy and Theology and was ordained a priest in 1892. After one year as a teacher in the advanced high school of Holy Cross at Nysa in Silesia, he studied at the University of Berlin from 1893 to 1895. His main interest here was the study of Semitic languages. After this he received the appointment to St. Gabriel in Mödling near Vienna, which was established in 1889. In St. Gabriel he taught a variety of theological subjects, as well as ancient and modern languages.

For his first early research project he devoted himself to the study of the languages of Oceania and Southeast Asia. Quite early on, his comparative linguistic studies caught the attention of the scientific circles of Vienna, in the Imperial Academy of Sciences, and also in the Anthropological Society of Vienna. As time went on, he put his main emphasis on ethnology and the history of religion, which were new fields of research at the time. He was prompted in this direction by his contacts with prominent Viennese orientalists and ethnologists as well as by the availability of a variety of documentation. He was also motivated in this direction by the different questions and problems which the Divine Word Missionaries, especially those working in the German protectorate part of Papua New Guinea, sent to him. In 1906 he founded Anthropos as an international review of ethnology and linguistics. This quickly became a well-known journal of anthropology.

Wilhelm Schmidt also intended this review to aid the Divine Word Missionaries in their work, which inevitably dealt with the encounter between peoples and cultures. He hoped the journal would help the missionaries, but he also wanted it to be a forum in which the inestimable knowledge of missionaries about strange peoples and cultures could be made available and reach a wider scientific anthropological audience. As a result the Anthropos should maintain the highest standards of anthropology. In 1931 Schmidt established the Anthropos Institute in Mödling. This was a working community comprised of editors and co-workers dedicated to the journal. Until 1950 Schmidt himself was the director of this institute. After the union of Austria with the German Reich in March of 1938 and after being harassed by the Gestapo, the Anthropos Institute and its editorial staff moved from St. Gabriel to Froideville near Fribourg in Switzerland. In 1962 it transferred to St. Augustin. In the fall of 1939 Schmidt began to teach ethnology at the University of Fribourg.

From 1939 until 1942 he was a lecturer and then as full professor from 1942 until 1948. Schmidt’s earliest ethnological interests were directed to the study of hunters and gatherers. In 1910 his book “Die Stellung der Pygmäenvölker in der Entwicklungsgeschichte des Menschen” (The Place of Pygmies in the Developmental History of Mankind) was published. This ushered in a new era in the study of pygmies. His primary focus was dedicated to the concept of a High God or Supreme Being as held by hunters and gatherers. He spelled this out in a series of articles (“L’origine de l’Idée de Dieu”) in the Anthropos (1908-1910). He expanded this into a twelve volume work (1912-1955) titled “Der Ursprung der Gottesidee” (The Origin of the Idea of God). As an assistant professor Wilhelm Schmidt gave lectures at the University of Vienna from 1921 until 1937. During this time he finished the work “Völker und Kulturen” (Peoples and Cultures), which he had begun in 1914. In this work he laid out his theory of culture circles (Kulturkreislehre), which he saw as a basis for the entire culture history of mankind. On this theory he also tried to establish the relationship and synthesis of all the languages of the earth (1926).

In 1923 Pius XI asked Schmidt to organize the ethnological section of the Mission Exhibit of 1925 and to set up the Lateran Museo Missionario-Ethnologico. He was appointed the director of this museum from 1926 to 1938. In 1937 he became a member of the recently founded Pontifical Academy of Sciences. His achievements earned him honorary doctorates from six universities.

Schmidt’s contributions to the method of culture historical ethnology, which also became known as the culture circle method, on which he built his theory of the very early monotheism of the representatives of the earliest people, is quite remarkable. As one of the originators of this theory and as a prominent figure in the area of ethnology and the science of religion in the first half of the 20th century, he became the founder of the Vienna School of Ethnology. He was not only its best known representative, but also its most controversial. 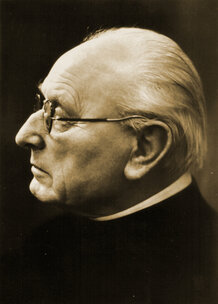 “Einladung zu Mitarbeit und Abonnement auf Anthropos,” authored by Wilhelm Schmidt and published in 1905, may be considered as the “founding document” of Anthropos. In this short booklet, Schmidt presents the concept of the journal and provides a sample questionnaire for collecting ethnographic data by missionaries in the field. He also states that the missionaries are expected, in the first place, to produce precise and methodologically correct descriptions of the observed reality; they should abstain from formulating any generalizations which require formal ethnological training and access to libraries (pp. 16-18).