Wilhelm Schmidt, the founder of Anthropos Journal (1906) and of the Anthropos Institute (1931), was born 150 years ago. In the first paragraph of his biographical book on Schmidt Ernst Brandewie writes:

When he was born on February 16 in 1868 – his full name was Heinrich Wilhelm Arnold – there was little to indicate that someday someone might wish to write the story of his life. As a result, little on any value was preserved from those early years. But when he himself began to write during his novitiate and seminary days we begin to get a sense of who he was, what he was interested in, his character and concerns, because he himself was a compulsive writer who saved most of what he put to paper. When he became famous, as he made more contacts with people, many of whom worked with him and remembered him, more and more about him and his work was preserved. This material, both written and verbal, both by and about Schmidt, forms the basis of this biography and the interpretations I make regarding him and his life.

Schmidt’s short biography is presented in the Heritage section of our webpage, another short overview (though in German) appears in the Exhibition section. Then, we recommend the longer presentations:

There is, of course, a long bibliographical list of Schmidt’s own writings. However, most were published in German.

On the occasion of Wilhelm Schmidt’s 150th birth anniversary we would like to draw your attention to his heritage and perhaps (re-)open a discussion on its current (ir-?)relevance… 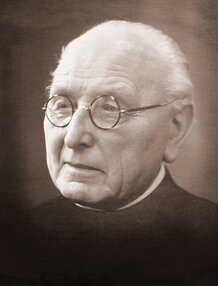