John Charlot: A Kumulipo of Hawai‘i

He Kumulipo is the sole surviving major cosmogonic chant from Hawai‘i. The earliest datable Hawaiian poem, it provides a basis for the history of Hawaiian language and literature. Its vision of the universe as a family tree is an inspiration to all who seek a new mental and emotional relationship between ourselves and our threatened environment.

Since its discovery in the nineteenth century, He Kumulipo has posed problems of interpretation. John Charlot applies the principles of form and redaction criticism used in classical and biblical commentaries. He separates two levels: the originally independent memorized materials and the redactional framework
into which the composer has inserted them. Charlot then concentrates on the personal view of the composer in the context of Polynesian litera-ture as a whole and of classical Hawaiian culture and education with its verbal organization of knowledge.

The chanter – basing himself on worldwide traditions and naturalscientific
observation – describes the development of the universe from the elements through plants and animals to human beings. Each human being progresses through similar stages as does humankind itself. The extended family is the whole universe, which is our home. He Kumulipo celebrates its power and beauty in poetry that unites intellect and emotion.

John Charlot came to Hawai‘i in 1949 and studied there, the mainland United States, Louvain, and Munich, where he earned his Dr. theol. in New Testament Studies. He encountered Polynesian literature in American Sāmoa and found he could interpret it by using the form and redaction criticism he had learned in Germany. He developed courses in Polynesian religions, including an M.A. at the
University of Hawai‘i, the first in an indigenous religion in the United States. He is currently writing a biography of his father, the artist and writer Jean Charlot. 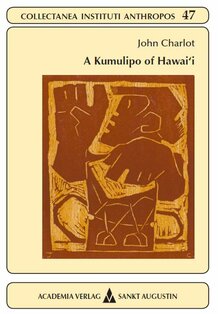