As an ethnologist, Wilhelm Schmidt, SVD, is associated with culture circles. But this narrow understanding can lead us to overlook many of the most important features of his life. He was a great organizer, for example, and a dedicated proponent of political involvement, a friend and confidant of important and influential people who sought out his advice. In many respects Schmidt was a man bound by his times; in other regards he was ahead of his times and much of what he said and started are as fresh and relevant as today. Far from being a narrow person, he thought and worked on a monumental scale.

Ernest Brandewie emphasizes the diversity of Schmidt's work in this biography. He also places Schmidt in his times, beginning with industrializing Germany where he was born, moving then to turn of the century Vienna, the first and second world wars, the inter-war years, and the time after the second world war. Only by doing this can one begin to understand Schmidt and the many contributions he made throughout his long life.

Ernest Brandewie, professor emeritus of anthropology at Indiana University at South Bend, Indiana, has been interested in the life and work of Wilhelm Schmidt, SVD, ever since his graduate school days at the University of Chicago. He is also the author of “Wilhelm Schmidt and the Origin of the Idea of God,” which is an intellectual history of Schmidt's major work. 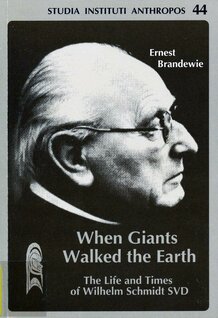