The society of Keo of Central Flores, Eastern Indonesia, houses pervasive treasures of religions, culture, and history. Apart from introducing a hitherto undescribed population, this book, which is derived from the author's extended research and living experiences among the Keo, presents analysis of major issues of religion, culture, identity, and local ideology involving rituals, social organization, and marriage alliance within the frame of anthropology of religion. Although most of the Keo are Muslims and Catholics, they still perceive their local beliefs and culture as part of their identity.

For the Keo people, Islam and Christianity are not only the practiced religions embedded in their holy books but also the basis for what they believe and do everyday, how they live in their traditional “house-based" and “basket-based" contexts. The monotheistic beliefs acquire certain elements from Keo culture and in turn, Keo culture adopts and adapts certain elements from both monotheistic faiths and ways of life. One typical characteristic of Keo society is that inculturation — the interaction between the monotheistic religions and Keo culture — both in Islam and Catholicism stems not only from the contextualization and the renewal movement of these monotheistic religions but also from a deep-rooted and continuing subconscious adherence to their local beliefs, which produces a harmonious and tolerant culture based on land, settlement, house, consanguineous and affinal relationships.

Philipus Tule, S.V.D. studied theology at St. Paul Major Seminary in Ledalero (Flores, Eastern Indonesia) from 1975 to 1984. In 1988, he was awarded a master's degree in Islamology at the Pontifical Institute of Arab and Islamic Studies, Rome, and he earned a Ph.D. in Anthropology of Religion at the Australian National University, Canberra in 2001.

Philipus Tule: Longing for the House of God, Dwelling in the House of the Ancestors. Local Belief, Christianity, and Islam among the Kéo of Central Flores. Fribourg: Academic Press Fribourg Switzerland, 2004. 366 pp., ph. ISBN 3-7278-1478-0. sfr 75,- 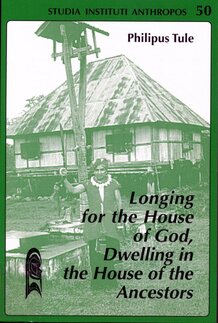