The most general questions addressed in this book concern the relationship between individual and society, the political role of ideology, and – ultimately – the limits of individual freedom. The author asks how institutionalized power, in this case the colonial polity of German Togo, formed its subjects. He points to the importance of ideological/practical means for this process, especially certain historically specific “symbolic-ideological complexes,” or grand narratives and the associated ritual behavior conducted in culturally determined space-time, whose disciplinary role consisted in shaping subjects’ cognitive principles of differentiation and their mental and bodily dispositions (habitus) that were “desirable” from the point of view of power holders. Specifically, he analyzes the process and particular effects of cooperation between holders of economic/political assets in German Togo (the colonial administration and businesses) on the one hand, and wielders of cultural/symbolic capital (the Catholic order of Steyler Missionaries or Society of the Divine Word), on the other, whose purpose was to discipline “German-Togolese” colonial subjects by means of persuasive discourses, public ritual processes, and individual “micro techniques” of the body. 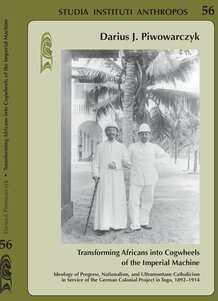