The contributions to this book address the translation of culture in the context of religion, showing that this can be a bi-directional or even multiple process because the works we analyse give evidence of how their authors resort to different cultural traditions and languages and interrelate them through translation, all trying to achieve one principal objective: that of communication across boundaries. Thus, our studies analyse texts in literary, ethnohistorical and/or linguistic terms, highlighting the processes of translation across cultures. On the one hand, they include studies of the missionary context of the Early Middle Ages (Murdoch) and of colonially dominated cultures in Latin America (Sachse, Dedenbach-Salazar, Sarion), India (Eliasson), China (Jasper), Africa (Colenso) and Australia (Moore), from the 16th to the early 20th century. On the other hand, they analyse literary works with respect to how these transmit and translate culture: one a German play in the context of Islam (Irving), the other one a novel of the Haitian diaspora in the USA (Darroch). Another contribution presents the challenges of how the concept of religion itself is conveyed in contemporary scholarly contexts (Roberts). The works and con/texts we analyse here reflect understandings of Christianity which are not always orthodox and where authors of the pre-colonial, colonial and post-colonial worlds try to convey and communicate cosmovisions and religious concepts to recipients beyond the original cultural spheres. By using different methodological tools, the contributors to this volume show the manifold and innovative ways in which this field of the translation of culture can be approached.

Sabine Dedenbach-Salazar Sáenz is Senior Lecturer in Latin American and Amerindian Studies at the Faculty of Arts and Humanities at the University of Stirling (Scotland, United Kingdom). Her research centres on the (ethno)linguistic study of historical and contemporary Amerindian languages, especially Quechua. She analyses the translation of culture and the dynamics of religious change, above all in the framework of the encounter and clash of cultures in the early colonial era. 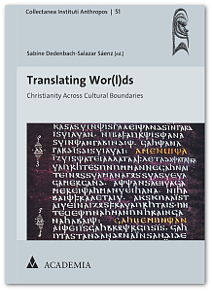