It is generally acknowledged that initiation plays an important role in the religious, cultural, and social life of societies and individuals. The thesis of this particular work is to focus explicitly on the Wosera male initiation rites with the purpose of describing and analysing their religious significance.

Any appreciation of the meaning of Wosera initiation must necessarily be seen within their integrated worldview. Such an approach is applied throughout this thesis. This is done in arriving at a more inclusive definition and understanding of "religion" and what is "religious" significance. Furthermore, the Wosera male initiation rites themselves are situated within the wider social, cultural, historical, economic, and religious contexts. Emphasis is also placed on the importance of art, symbols, ritual, and myth as keys for uncovering meaning, and the author reflects always the present situation of tremendous social change and modern village life.

The book offers a description of the Wosera male initiation rites from various perspectives. Beginning with a general background of the wider religious, cultural, and ritual context of Melanesia, and a detailed description of the Wosera male initiation, the author analyses its religious and cultural meaning. From understanding the meaning of traditional initiation, he shifts to the stage of dialogue, integration, and inculturation with the present-day situation of Christianity. While this thesis is focused on a particular case study, the general methodology, results, and reflections also have some pertinence for other situations, especially in Melanesia.

Roger Schroeder is Professor of Intercultural Ministries and holder of the Bishop Francis X. Ford, M.M., Chair of Catholic Missiology. He was ordained in 1979 as a member of the Society of the Divine Word (S.V.D.). Of the six years he has lived and worked as a missionary in Papua New Guinea, he was with the Wosera for more than three years. Upon earning a Doctorate in Missiology from the Pontifical Gregorian University in Rome, Schroeder began teaching at Catholic Theological Union in Chicago. He has been at CTU since 1990. 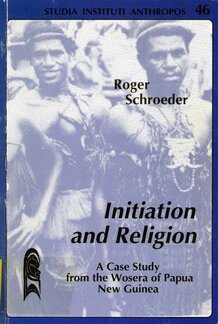