This book describes the pattern of the daily life of the people of Biboki in West Timor — Eastern Indonesia — in terms of their efforts to affirm the "roots" of their daily lives. The core claim of this study is that oral traditions form the basis for which local people both trace their origins and at the same time endeavour to conceptualize their relationships with their fellow human beings and with the cosmos. It means that oral traditions are a fundamental tool for people in establishing their roots of life within a community and in assisting their efforts to establish authority within society. The chapters of the book present a range of genres of oral traditions, in conjunction with detailed exegesis and linguistic analysis in order to demonstrate the fundamental rote of these oral traditions within the life of the people.

Gregor Neonbasu SVD was born in Timor, lndonesia in 1960. He completed his PhD in anthropology at The Australian Na¬tional University of Canberra in 2005. He is the Chairman of St. Arnold Educational Foundation, which runs the Catholic University of Widya Mandira Kupang of West Timor, Director of Manse Nsae Research Center as well as the Head of Social Cultural Commission of the Research Region Council of East Nusa Tenggara Province. He teaches anthropology and sociol-ogy at the Catholic University of Widya Mandira, the Christian University of Artha Wacana Kupang and the Pastoral Institute of the Archdiocese of Kupang 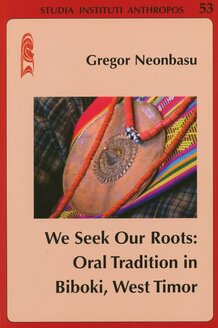