Anthony R. Walker: Buddhism in the Lahu and Wa Mountains

The two essays of the book refl ect the author’s study of religious architecture and liturgical practices in a Lahu Nyi (Red Lahu) village inthe mountains of North Thailand, where he lived during the period 1966 to 1970, and in Yunnan through subsequent visits to important centers of Lahu Buddhism in south western Yunnan, which began during the early 1990s as the Chinese authorities became increasingly tolerant of foreign researchers.
The Lahu people adopted and adapted many liturgical practices from their Theravada Buddhist neighbors in the lowlands. However, this was not the Theravada Buddhism of the Tai peoples, but rather the Mahayana tradition of the Han Chinese, disseminated by monks based in the famous monastic complex in Jizu Shan, located in today’s Binchuan County.
The Lahu peoples – even those who have converted to a so-called “world religion” (in the Lahu case, Buddhism or Christianity) – accept the reality and often fear the activities of malicious spirits. But why were the Lahu apparently unique in their perceived need to erect a special building in which to perform ritual activities specifically to honor the high god they call G’uiˬ sha? 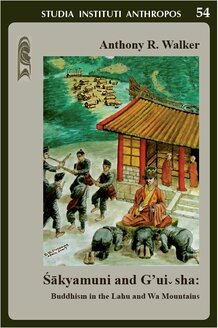